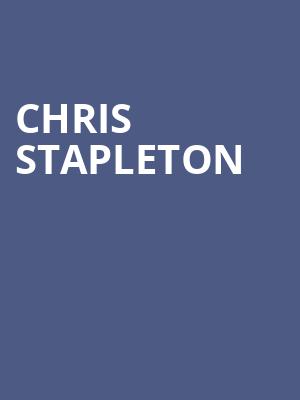 Stapleton, who was raised in Kentucky, sings with the power of a classic Southern rocker, but modulates his rawness with a great sense of soul phrasing and a seasoned balladeer's ability to scale down.

Country crooner Chris Stapleton's legacy reaches far beyond Nashville's city limits. Having penned songs for the likes of Adele, Sheryl Crow, and Alison Krauss, there's a slim chance that you've not heard a tune created by the prolific songwriter. In 2015, the stetson-toting country gentleman stepped from out of the shadows with Traveller. In 2017 he released From A Room: Volume 1, followed later in the year with Volume 2 . Don't miss Stapleton live in 2022 as he celebrates his three Grammy wins including Best Country Album, adding an extensive list of new dates to his All-American Road Show!

Shying away from gimmicks, Stapleton puts on one heck of a live show by keeping things simple and keeping the spotlight on the music. The outlaw performer often plays together with his wife, and their harmonious yet stripped back set has been described as haunting, raw and spiritual. There are no fist pumps or party anthems here, just good old-fashioned southern music that would make Johnny Cash proud.

Chris Stapleton's show in Charlotte was the most incredible show I've... more

Pure raw unadulterated talent....: one of the best shows I've ever attended... more

Sound good to you? Share this page on social media and let your friends know about Chris Stapleton at Saratoga Performing Arts Center.