Sorry! You missed Too Many Zooz at The Hollow

Unfortunately, we don't have any information about upcoming performances of this show. Maybe we can interest you with something similar from the options below... 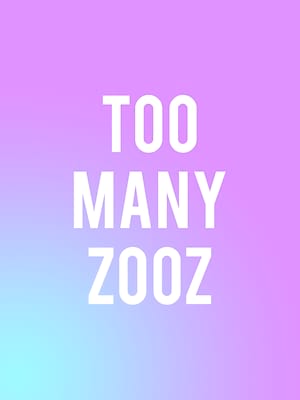 Brass + House Music = Too Many Zooz

Alert me on return

Why See Too Many Zooz?

live on the road

Formed in 2013, Too Many Zooz continue to North America and beyond alight with their heady blend of brass and house music. Their status as an underground phenomenon is both literal and figurative, as the outfit started in the subways of the Big Apple, filling the commuter's ears with their upbeat and rhythm orientated music.

Their unique brand of danceable 'brass house' calls to mind an era where real instruments and street corner busking made musical history, and their debut album Subway Gawdz, released in 2016, shied away from over-produced electronic sounds, embracing their subway roots and keeping the focus on their instruments. While there may only be three of them on stage, their New Orleans front-line inspired sound is bold, loud and bound to have you on your feet grooving along.

Seen Too Many Zooz? Loved it? Hated it?

Sound good to you? Share this page on social media and let your friends know about Too Many Zooz at The Hollow.