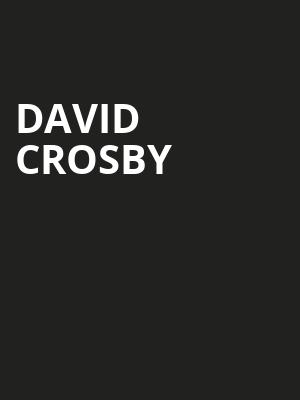 This is about the songs. The tale telling.

An icon of counter culture and one-third of folk's most revered supergroup, David Crosby has been honing his trademark harmonic style since the early sixties. A contemporary of Dylan, it wasn't until he began writing with The Byrds that he truly found his own voice, beginning with his first solo-record 'If Only I Could Remember My Name' in 1971.

Since then, in addition to touring with Crosby, Stills & Nash and collaborating with everyone from Joni Mitchell to Phil Collins, he has fostered a strong career on his own. Catch him this spring as he embarks on another leg of his Sky Trails Tour with the Sky Trails band - including his son James Raymond, Jeff Pevar, Mai Leisz, Steve SiStanislao and Michelle Wills. Alongside some of his greatest hits, the evening will also feature as yet unreleased tunes from his upcoming album!

After purchasing His last album " Here if you Listen" which is a fantastic... more

Was so lucky to see this show last night. His voice has not lost a thing.... more

Sound good to you? Share this page on social media and let your friends know about David Crosby at Hart Theatre.